In this video, CryptoKitties creator and Radix Co-Founder Piers Ridyard talks about scaling blockchains and the future of decentralized finance.

Blockchain is a decentralized ledger that records transactions across many computers. It was first introduced by Satoshi Nakamoto in 2009 as the backbone of the digital currency, Bitcoin. Read more in detail here: what’s blockchain. 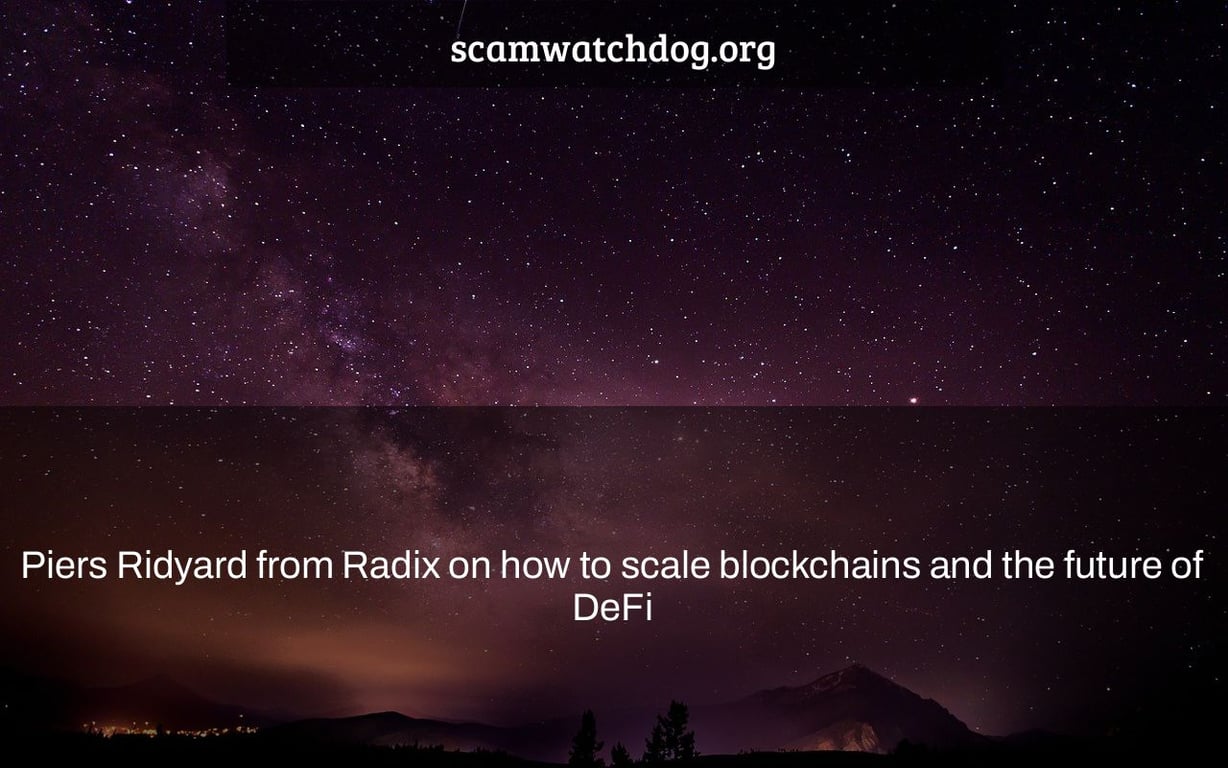 Radix, a layer-1 blockchain under development since 2018, is a little farther removed from the action—and has its own fan base. Radix showed 1.4 million transactions per second (TPS) during testing that year, making it one of the quickest and most scalable blockchains.

Radix CEO Piers Ridyard joins Cryptonites presenter Alex Fazel on his show today. Ridyard has spent more than five years in the cryptocurrency field, from mining on the Ethereum genesis block in early 2015 to founding and departing a YCombinator firm in 2017 that provided decentralized deal-room software for insurance companies.

Today, Ridyard spoke about his intentions for Radix, the future of DeFi and public consensus, and how crypto helps the unbanked in developing countries. This is a must-see episode!

Here are a few takeaways from the show.

The development of DeFi

“Some of the highlights of DeFi 2021 have simply been the maturation of the place, right?” In DeFi Summer, there was an early Cambrian explosion of ideas that poured forth. It progressed from highly stable initiatives like Aave or MakerDAO, which have been under development for a long time. Then there was this instantaneous realization of being able to put things together, and yield farming was born.”

“It suddenly went through this really speculative bull run where cash and how you attract capital and liquidity into the market became very important.” And now we’re beginning to have more serious discussions about, say, how it interacts with conventional finance. How can we get institutions engaged, but it has also been one of the drawbacks because the regulatory environment remains murky, and people are still concerned about what the SEC will do and how they will address the issue.”

“And every regulator in the world is still trying to figure out how to do this correctly.” And I believe that we’re experiencing a little bit like, and it’s not exactly the same because of the 2017 ICO bubble, where there was this tremendous bullishness that blossomed, but no actual things came out of it, right? So people were like, “Oh, we’re going to have a token, like a banana token or an Apple token or a labor marketplace or whatever.” However, just a few objects were really erected.”

In today’s world, decentralization is the norm.

“You want for layer one (network) since that’s what you wanted for the internet in the first place.” The internet’s protocol was built around the idea of nuclear war, in which whole cities or continents may be obliterated. And it was built to withstand this, and you want the same thing for the public ledger.”

“There’s no reason why a permission system can’t be built on top of a public decentralized ledger; you have the best of both worlds and the flexibility to say, ‘I’ll be regulatory compliant.’” But, because of its antifragility, the infrastructure on which it is built is the safest imaginable infrastructure. As a result, I see a lot of institutional capital that wants to put its money into DeFi.”

“For good reason, there is a global yield famine, since the amount of money that has been spent on quantitative easing and government subsidies in the ways that COVID has influenced the global economy has left very few locations for capital to earn excellent yields in the real world.” However, we are fundamentally redesigning finance in DeFi, and all of that innovation is generating yield opportunities. “Wow, I really would want to get some money in there,” all of these institutions are thinking.

Like what you’ve seen so far? Stay up to date by subscribing.