The phrase “stablecoin” has never been more relevant. And with the recent rise in trading volume, it seems we might be approaching a turning point for cryptocurrencies as we know them. Stablecoins could help stabilize cryptocurrency prices and facilitate further adoption of crypto assets by bringing legitimacy to the industry from regulated entities like banks and governments.

The “stablecoins” are cryptocurrencies that are designed to be as stable as possible. They are meant to have a value that is fixed against the US dollar, or any other fiat currency. The first stablecoin was Tether, and it was released in October 2017. Since then, there has been much debate about whether or not these currencies should exist at all. 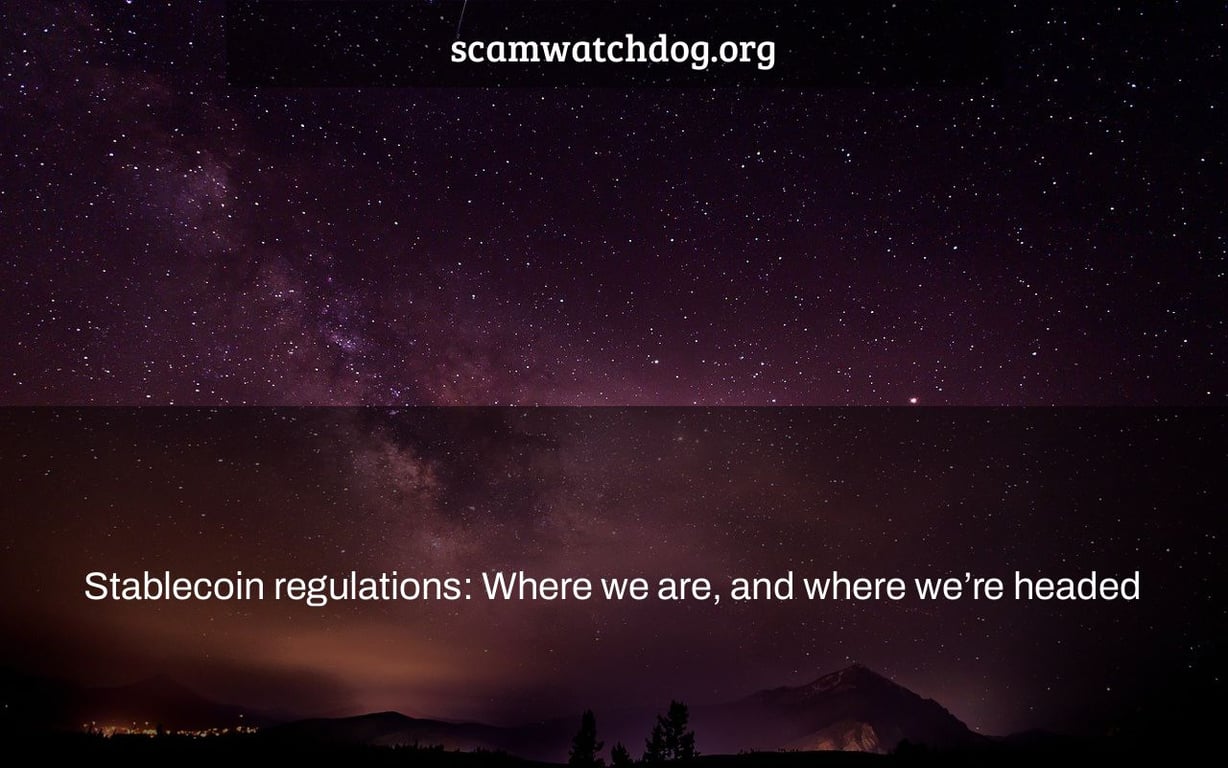 It was subjected to a constant barrage of criticism in the early crypto era, when few people had heard of any cryptocurrency other than Bitcoin. In May, Berkshire Hathaway Vice Chairman Charlie Munger summed up the criticisms by calling Bitcoin “disgusting and antithetical to the interests of humanity.” Despite this, Bitcoin persisted, slowly but surely infiltrating mainstream finance on its own merits.

On the strength of smart contracts, a whole new crypto dynamic arose in 2020 in the shape of Decentralized Finance (DeFi). In less than two years, Ethereum grew from under $1 billion to over $158 billion, re-creating the non-mediated financial industry.

JPMorgan Chase, on the other hand, was the first to warn about the looming danger, even before 2020. Back in February 2018, the world’s biggest bank said that Bitcoin’s disruptive potential is linked to smart contract platforms.

“Both financial institutions and non-banking rivals face the possibility of payment processing and other services being disrupted by technologies that do not need intermediation, such as cryptocurrency.”

We should anticipate a stronger regulatory hand now that crypto-mainstreaming is gaining traction, with hundreds of billions backing it up. In November 2021, JPMorgan CEO Jamie Dimon foresaw this once again.

“Regardless of what anybody feels about it, the government will control it.” They’re going to regulate it for (anti-money laundering), (Bank Secrecy Act), and tax considerations.”

Here’s what to anticipate from Finance 2.0 in 2022 and beyond, based on the current regulatory winds.

Stablecoins will continue to be the primary regulatory target.

Nothing has been the same for crypto trading since Tether Limited established the Tether (USDT) stablecoin in 2014. Although Tether’s collateralization has been questioned, the premise underlying stablecoins is straightforward. They can be redeemed for USD from the reserve because they are backed by assets with a 1:1 value to USD.

In the same way that Wrapped Bitcoin (WBTC) is a digital wrapper for BTC on non-Bitcoin blockchain systems like Ethereum, stablecoins are digital wraps for fiat currencies. While the stability given by a worldwide reserve currency such as the US dollar is very beneficial for trade and online wealth storage, it also poses a risk.

Governments are beginning to see stablecoins as an entrance point into disruptive DeFi, but without the restrictions that commercial banks must adhere to when dealing with fiat money. Stablecoins had a particularly spectacular year in 2021, with a market valuation of $150 billion, up 400 percent from the previous year.

Two main questions emerge as a result of the increased popularity of stablecoins. First, do they have enough liquid funds (or genuine reserves in the first place) to fulfill the withdrawal demand if there is a bank run? Second, stablecoins already serve as digital money, but where does this leave CBDCs (Central Bank Digital Currencies) in the private sector?

Furthermore, since stablecoins are not recognized as bank deposits, the Federal Reserve and the Office of the Comptroller of the Currency have limited tracking options. The President’s Working Group (PWG) on Financial Markets, which includes the SEC, CFTC, Treasury Department, and Federal Reserve, is set to oversee the stablecoin market in the United States.

On November 1, the organization released a study proposing for stablecoin issuers to be regulated based on three principles:

To put it another way, stablecoin issuers should be treated the same as commercial banks. However, there is no consistent attitude among these federal overseers. Stablecoins should be registered as securities, according to SEC Chair Gary Gensler, provided they are backed by securities reserves.

Teana Baker-Taylor, chief policy officer for the Chamber of Digital Commerce, on the other hand, criticized the report’s regulatory approach. Stablecoins, she believes, should not be treated as securities or regulated as banks, but rather as payment processors. “She says,” she says.

“However, we think that stablecoin payment systems should be regulated similarly to other retail-focused digital payment enterprises, based on the idea of same activity, same risk, same regulation.”

This viewpoint seems to have bipartisan support. Reps. Jim Himes (D-Conn.) and Tom Emmer (R-Minn.) have both indicated that putting stablecoins under a banking cover would be overkill, destroying American competitiveness. Common terminology like commodity, money, and security, on the other hand, should be given greater legislative attention in order to incorporate digital assets as the basis for a more relaxed regulatory approach.

While digital assets have been around — and somewhat popular – for a few years, widespread usage has recently accelerated. This is owing to a variety of causes, one of which being easier access to digital content. To buy and sell digital assets, you don’t need to join up for a crypto-native platform; a number of famous stock and FX trading platforms, such as eToro, now support a variety of cryptocurrencies. Expanded regulation will almost certainly accompany increased access.

Divergent Approaches in India, the United Kingdom, and Brazil

While there are reasons to be positive in the United States, an Indian bill called the Cryptocurrency and Regulation of Official Digital Currency Bill seeks to outlaw all private cryptocurrencies. On this law, Indian Prime Minister Narendra Modi made an odd statement:

“Take, for example, cryptocurrencies or Bitcoin. It is critical that all countries collaborate on this to guarantee that it does not get into the wrong hands, endangering our children.”

Similarly, on December 17th, the Reserve Bank of India (RBI) advocated for a comprehensive crypto prohibition, as described in its presentation to board members. Such broad prohibitions seem to be linked to another section of the law — a framework for the RBI to create India’s own digital currency.

Even in its present form, however, the measure allows for crypto exceptions if they encourage the use of the underlying technology in the public sector.

Meanwhile, the Financial Conduct Authority of the United Kingdom (FCA) maintains its prohibition on the marketing, distribution, and sale of crypto-derivatives to retail clients. The Bank of England (BoE) has urged for worldwide crypto laws to be implemented, claiming that no government can do it alone.

In an interview with the Times, Sarah Breeden, the Bank of England’s executive director for financial stability strategy and risk, said it’s tough for central banks to oversee institutional investors’ digital assets. However, according to the Bank of England’s Financial Stability Report, crypto assets do not currently pose a monetary risk. Despite this, the research recommends the construction of a new worldwide regulatory framework to address crypto volatility while ensuring long-term innovation.

Brazil is gaining ground on El Salvador in the cryptocurrency race. New legislation are being created that, if passed, will allow certain employees to accept Bitcoin payments, thereby making Bitcoin legal cash. This has already occurred on a lesser basis in a few American cities. For example, Miami Mayor Francis Suarez tweeted that he would accept a BTC-only salary.

The Most Advanced Crypto Approach in the EU

The European Union’s Markets in Crypto Assets Regulation is in charge of standardizing the crypto framework across all 27 member states (MiCA). The group has published a 168-page study that wields a fine regulatory knife, even distinguishing between various sorts of stablecoins. MiCA, for example, considers algorithmic stablecoins like MakerDAO differently from fiat-backed ones. As a result, a regulated custodian will be necessary.

It’s unclear how this will function if MakerDAO is governed by smart contracts. Regardless, MiCA’s primary criterion is that all stablecoin issuers maintain an immediate cash reserve of $400,000, or 2% of their overall reserve assets. Additionally, stablecoin issuers with a market worth of more than $1 billion will be subject to a 3% backup.

Furthermore, the proposed MiCA laws seek to limit stablecoin use inside the 27-nation states so that monetary policy and the impending digital euro are not jeopardized. Having said that, the EU’s position on digital assets is mostly favourable. With the new laws, a crypto company based in one country would be permitted to operate throughout the Eurozone.

In conclusion, a clear trend toward regulating stablecoins and laying the groundwork for CBDCs can be seen. Central banks and governments see crypto assets, including stablecoins, as something that has to be public – and monitored – in this context. Otherwise, they are distinct from the emerging new monetary system, which has the potential to cause instability.

This is what the phrase “financial stability” implies when it refers to central banking’s most powerful instrument yet: CBDCs. As a result, there is a push to make all crypto assets more transparent.

Surprisingly, the United States, as the world’s global reserve currency, has remained largely silent on any practical CBDC implementation. In this view, a decentralized conglomerate of stablecoin issuers may be more likely to fill this function, with regulatory bodies depending on laws to keep them from becoming too huge to handle.

Shane Neagle of The Tokenist contributes a guest piece.

Since 2015, Shane has been a vocal advocate of the decentralized finance movement. He’s authored hundreds of papers on the topic of digital securities, which are the combination of conventional financial securities with distributed ledger technology (DLT). He is still enthralled by the expanding influence of technology on business and daily life.

The “u.s. government stablecoin” is a cryptocurrency that has been approved by the U.S. government and is regulated by the U.S. Treasury Department’s Office of Foreign Assets Control (OFAC). This type of currency is not backed by any physical asset, but instead it is linked to the value of the USD dollar.